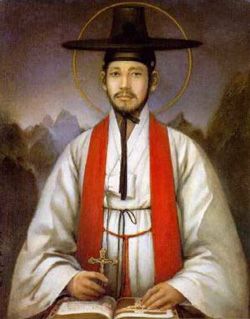 Saint Kim Taegon Andrea, generally referred to as Saint Andrew Kim Taegon, was the first Korean-born Catholic priest and is the patron saint of Korea.

In the late 18th Century, Roman Catholicism began to take root slowly in Korea and was introduced by lay people. In 1836, Korea saw its first consecrated missionary members of the Foreign Missions Society arrive. They found out that the people there were already practicing Catholicism.

Born of Korea’s traditional ruling class, Kim’s parents converted to Catholicism which was prohibited heavily in Confucian Korea – his father was subsequently martyred for practicing Christianity. After baptism at age 15, Kim studied at a seminary in the Portuguese colony of Macau. During his seminary years, he also spent time in Lolomboy, Bocaue, Bulacan, Philippines, where his statue was erected in the village. He was ordained a priest in Shanghai in 1844, by the French bishop Jean-Joseph-Jean-Baptiste Ferréol. After ordination, he returned to Korea to preach and evangelize.

In those days, the Joseon Dynasty ruled the country and Christianity was suppressed thereby causing many Christians to be persecuted and executed. Catholics had to covertly practice their faith. Kim was one of several thousand Christians who were executed during this time.

In 1846, at the age of 25, he was tortured and beheaded near Seoul on the Han River. Before Bishop Ferréol died from exhaustion on February 3, 1853, his final wish was to be buried beside Kim, the young seminarian whom he ordained. He was very much affected by the death of Andrew, the young martyr. He remarked, “You will never know how sad I was to lose this young native priest. I have loved him as a father loved his son. It is a consolation for me to think of his eternal happiness.”

On May 6, 1984, Pope John Paul II canonized Kim along with 102 other Korean Martyrs, including Paul Chong Hasang, during his trip to Korea. Their memorial is September 20.