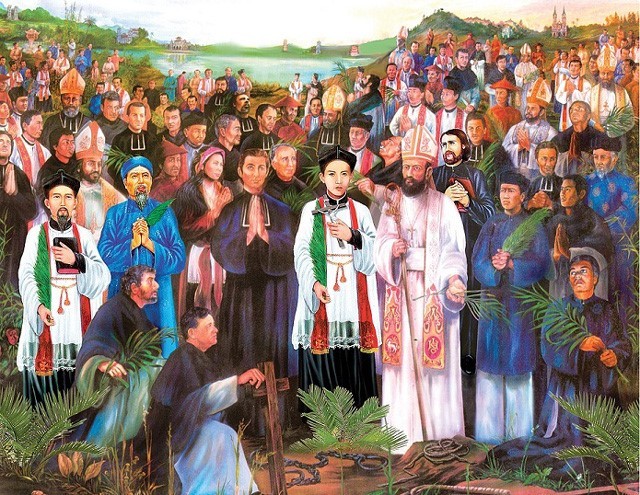 On June 19, 1988, Pope John Paul II canonized a group of 117 martyrs who died for the Roman Catholic Faith in Vietnam during the nineteenth century. The group was made up of 96 Vietnamese, 11 Spaniards, and 10 French. Eight of the group were bishops, 50 were priests and 59 were lay Catholics. Some of the priests were Dominicans, others were diocesan priests who belonged to the Paris Mission Society. One such diocesan priest was St. Theophane Venard.

St. Andrew Dung-Lac, who represents this group of heroes, was a Vietnamese diocesan priest. He came from a poor, non-Christian family and was taught by a Christian lay catechist. He worked in the missions with the priests of the Foreign Mission Society of Paris. He was imprisoned and repeatedly tortured during the persecutions of Minh-Meng, the emperor of Vietnam between 1820 and 1840 who was famed for persecutions of the Christians. Among the many Vietnamese and international martyrs who died alongside St. Andrew Dung-Lac was Saint Peter Thi. This feast day, and the witnesses of the lives of the martyrs, give testament to the sufferings inflicted on the Vietnamese Church, which are among the most terrible in the long history of Christian martyrdom. Their memorial is November 24.