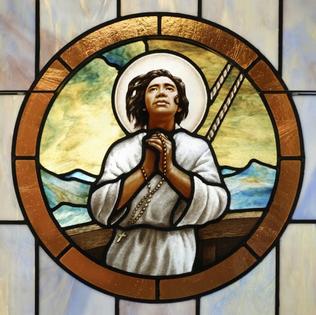 Saint Lorenzo Ruiz is the first Filipino venerated in the Roman Catholic Church. Of Chinese-Filipino parentage, he became the country’s protomartyr after his execution by the Tokugawa Shogunate during its persecution of Japanese Christians in the 17th century. Lorenzo Ruiz was born in Binondo, Manila, to a Chinese father and a Filipino mother, both Catholic. Needless to say, he learned the Chinese language from his father, while his mother taught him Tagalog.

At a young age, Lorenzo served as an altar boy at the Binondo Church. He studied under the Dominican friars. After a few years, Ruiz earned the title of calligrapher because of his skillful penmanship. He became a member of the Confraternity of the Most Holy Rosary. He married Rosario and they had two sons and a daughter. The Ruiz family led a generally peaceful, religious and comfortable life. However, while working as a clerk for the Binondo Church, Ruiz was falsely accused of killing a Spaniard. Thereby, he sought asylum on board a ship with the help of three Dominican priests.

Lorenzo and some of his friends left for Okinawa on June 10, 1636, with the aid of the Dominican fathers. Upon arrival in Japan, the missionaries were arrested and thrown into prison. After two years, they were transferred to Nagasaki to face trial by torture. Ruiz and his companions faced different types of torture. On September 27, 1637, he and his companions were taken to the Nishizaka Hill, where they were tortured, and hung upside down. The method was supposed to be extremely painful, as victims were bound, with one hand always left free so that they may signal their desire to recant, that would lead to their release.

Ruiz refused to renounce Christianity and died from blood loss and suffocation. His body was cremated, with the ashes thrown into the sea. The cause of beatification of St. Lorenzo Ruiz was written by a respected historian, Fr. Fidel Villarroel, O.P. Ruiz was beatified during Pope John Paul II’s papal visit to the Philippines.

It was the first beatification ceremony to be held outside the Vatican in history. St. Lorenzo Ruiz was canonized by the same pope in the Vatican on October 18, 1987, making him the first Filipino saint. His canonization was based on a miracle that took place in 1983, when Cecilia Alegria Policarpio, a two-year old girl suffering from in-born brain atrophy was cured after her family and supporters prayed to Ruiz for his intercession. In Chicago, St. Lorenzo Ruiz is enshrined at Old St. Mary’s Church.