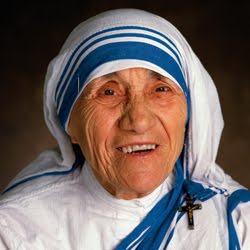 Although Mother Teresa was not of Asian origin, she was revered by most Catholics in Asia, especially in India. Agnes Gonxha Bojaxhiu was born in Skopje, Macedonia on August 26, 1910, to Albanian heritage. Her father, a well-respected local businessman, died when she was eight-years old, leaving her mother, a devoutly religious woman, to open an embroidery and cloth business to support the family.

After spending her adolescence deeply involved in parish activities, Agnes left home for the Loreto Convent in Ireland, where she became a postulant and received the name of Teresa, after her patroness, St. Therese of Lisieux. Agnes was sent to India to join the Loreto novitiate in Calcutta on January 6, 1929, and made her final profession on May 24, 1937, and hereafter was called Mother Teresa.

In Calcutta, during the 1930s and ’40s, she taught at St. Mary’s Bengali Medium School. On September 10, 1946, on a train journey from Calcutta to Darjeeling, Mother Teresa received what she termed the “call within a call,” that led to formation of the Missionaries of Charity Family (Sisters, Brothers, Fathers, and Co-Workers). Her inspiration is revealed in the purpose and mission she would give to her new institute: “To quench the infinite thirst of Jesus on the cross for love and souls" by "laboring at the salvation and sanctification of the poorest of the poor.”

On October 7, 1950, the new congregation of the Missionaries of Charity was officially established as a religious institute for the Archdiocese of Calcutta. Through Mother Teresa’s endless efforts in the 1950s and 1960s, Missionaries of Charity expanded not only in Calcutta but throughout India, Venezuela, a suburb of Rome and Tanzania. There was no stopping, so from the late 1960s through the 1980s, the community spread across the globe in Australia, the Middle East, and North America, with the first novitiate outside Calcutta in London.

When Mother Teresa received the Nobel Peace Prize in 1979, the Missionaries of Charity reached a record number of 158 sites. The Missionaries of Charity reached Communist countries in 1979 with a house in Zagreb, Croatia, and in 1980 East Berlin, and continued to expand up to the 1990s with houses in almost all Communist nations, including 15 sites in the former Soviet Union.

Mother Teresa spoke at the fortieth anniversary of the United Nations General Assembly in October 1985. On Christmas Eve of that year, Mother Teresa opened “Gift of Love” in New York, her first house for AIDS patients. In the coming years, this home would be followed by others, in the United States and elsewhere, devoted specifically for those with AIDS.