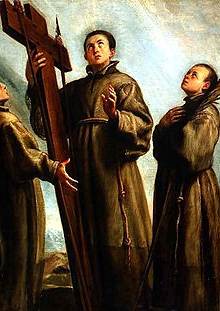 St. Gonsalo Garcia was the first canonized saint from India. Canonized on June 8, 1862 by Pope Pius IX, his feast day is February 6.

St. Gonsalo Garcia was born around 1556 in the fortified city of Bassein in the Portuguese quarter of India. His father was Portuguese soldier and his mother was a native.

As he grew up, Gonsalo stayed with the local Jesuits. While there, he became friends with Fr. Sebastian Gonsalves, who became Gonsalo’s mentor. He studied grammar, philosophy and Roman history with the Jesuits. When he was 13, Gonsalo asked Fr. Sebastian for permission to join the missionaries to Japan. His request was denied because he was too young, but was approved two years later.

Once the missionaries reached Japan, Gonsalo worked as a catechist. He would walk the streets drawing children to him with his kindness and a fluent understanding of Japanese. He worked for eight years in the Japanese missionary fields with the Jesuits. He tried to join the Jesuit order, but he was turned down because of his native origin.

Losing hope, Gonsalo left the Jesuits. He moved to the Japanese city of lacao and started work as a merchant. His work flourished. Through his business transaction he came into contact with many high-ranking members of Japanese society, including the Emperor.

Even though he was successful in business, Gonsalo yearned to become a member of a religious order. Eventually, he was accepted by the Franciscans. He moved to Manila, where he worked as a catechist. Once again, his fluency in Japanese came in handy. In 1593, he joined a Spanish delegation to Japan as a translator. Despite some initial problems, the local king, Taikosama, was friendly towards them, and the Franciscans became quite successful in their missionary efforts.

The success of the Franciscans angered the Buddhist priests. They tried to get the king to expel the Franciscans, but he refused. However, that was about to change. A Spanish treasure ship named the San Felipe was forced to land because of a storm. The captain erroneously told the local Japanese custom agent that the Franciscans had been sent by the Spanish king to influence the people to rebel against their ruler. This lie was taken advantage of by the enemies of the Franciscans.

When Taikosama heard the story, he was enraged and ordered that all missionaries in Japan be arrested and executed. The Franciscans were arrested on December 8, 1596 and sentenced to death. The following February, 26 Christians were taken to a hill outside of Nagasaki and crucified.

Gonsalo was the first to be crucified. Once the missionaries were nailed to the crosses, the soldiers pierced each one through the heart with a spear. Upon seeing this, Christians in the crowd broke through the guards and used pieces of cloth to soak up the blood of these holy martyrs. At the end of the day, even some of the toughest soldiers had tears in their eyes, and for 40 days they remained intact.